I finally decided to take the plunge and jump on the 3D printing bandwagon. My new 3D printer was delivered Thursday last week (03/19). I settled on the Da Vinci 2.0 Duo after a fair amount of reading. The primary thing that sold me was a) the price and b) the dual extrusion heads.

This particular printer was priced at $650, it comes with two extruders so you can mix it up and print in multiple colors, a heated build platform (it seems like this is included on most 3D printers now though) and a couple spools of ABS filament. I was very impressed, the printer required very little set up, by that I mean I took it out of the box, plugged it in and started printing. XYZprinting, the manufacturers of the Da Vinci, supposedly calibrate everything in the factory and my experience seems to confirm that.

The picture above is one of the demos that come built in to the printer. Granted, I am not an expert in 3D printing, but I think it came out fairly well given I had to make no adjustments.

I of course spent most of the following days printing everything I could think of including figurines, a cup, a soap dish, and a headphone holder:

All of these were printed at the second highest detail setting and frankly I think they look fine at that setting but I was curious what the highest setting would look like so I printed this dinaosaur figurine:

It is probably tough to see it because of my potato image quality, but the lines in the dinosaur figurine are much less pronounced, however this print also took subsantially longer (to the tune of 5-6 hours) more than prints at the medium detail setting. I'm not sure if this is to be expected with all 3D printers or if it is this model in particular, but I feel like the quicker build time is a worthwhile trade off for slightly poorer quality.

All in, this particular printer model seems to be a great option for those looking to get into 3D printing. I am not yet experienced enough in printing to really have any real qualms, however I'm sure there were trade offs somewhere to make the printer so affordable. The only gripe I have so far is a bit of trouble with some replacement filament I purchased but the company's support seems responsive so I'll give them a chance to help with that before bashing them too much.

The one thing that surprised me the most about purchasing the printer is the sort of sudden realization that you can print just about anything. The popular go to here is the whole 3D printing a gun, though I am not convinced that is 100% conceivable unless you have a ridiculous printer, but there are tons of practical things you can print like my soap dish, or headphone holder. Most of my prints have been spontaneous because its cool prints, but I can definitely see this sort of changing things in the future for me and, well, the world! 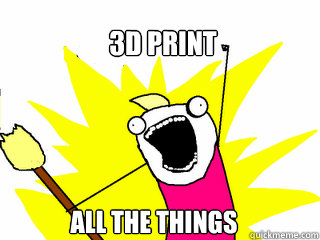